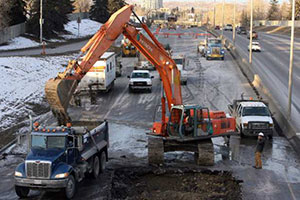 Water main breaks cause traffic delays and headaches for Calgary commuters. They create a big mess and keep crews working round the clock to get repairs done as quickly as possible. And sometimes, they can happen more than once in the same spot within a matter of weeks.

But the number of breaks have also gone down significantly over the years thanks to the city’s aggressive main replacement and protection program, all the while doubling its water main network over the last 30 years to 5,000 kilometres.

"If you magically pulled out those pipes out of the ground and laid them end to end, it would basically reach Halifax," said Andy Hughes, leader of asset planning with the City of Calgary’s water resources.

"When you have a network that size, and the network in place is about 100 years old, breaks will happen …. The key is to keep them as low as you can."

Hughes said the city has been able to keep the main break rate down to about 250 a year, thanks to significant investments in its protection and replacement programs, resulting in Calgary being "one of the best performing municipalities" across Canada.

Here are five things you might not have known about Calgary’s water main network:

Water Main Breaks By The Numbers 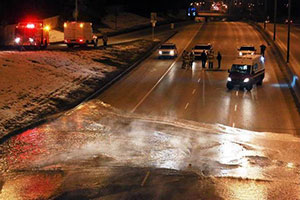 In 1982, the city saw an all-time high of more than 1,800 breaks in one year. At the time, much of the network was metallic, and a larger percentage of breaks are attributable to metallic pipes.

"That really was the trigger for us to really drill into our asset management practices and risk identification, and really double up on our efforts in strategically replacing mains," Hughes said, adding the move to PVC from metallic pipes has also helped bring down the break rate.

"The city has reduced its annual main break count by 85 per cent, while managing a network that has doubled in length," Hughes said, adding the main break rate equates to roughly five breaks per 100 kilometres of network per year.

December 09, 2012: The Calgary Fire Department and City of Calgary workers dealt with a water main break that closed the southbound lanes of Crowchild Trail. 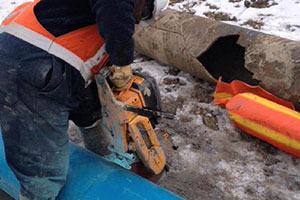 Hughes said the city now invests an average of more than $10 million per year on replacing aging mains, and has replaced more than 630 kilometres of main since 1967.

The city also spends an average of $2 million a year on its corrosion protection program, which involves attaching anodes to the metallic pipes. The anodes corrode instead of the pipe, giving the main additional protection and lengthening its lifespan. The city on average adds this type of protection to about 25 kilometres of pipe per year, and has protected 350 kilometres of pipe thus far.

Dollar for dollar, the cost of protecting 10 kilometres of pipe is the same cost as replacing one kilometre of pipe, Hughes said. 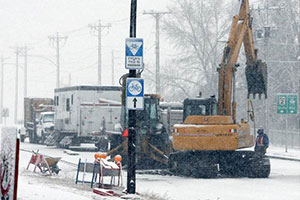 Pipes are buried at a depth of three metres, below the frost line, and the water main network is "very resilient to changing climatic conditions," according to the city.

But cold weather and temperature swings can have an effect on the pipes, with January seeing the highest breaks in the year. Statistics show 12 per cent of breaks take place in the first month of the year, followed by a little over 10 per cent of breaks in February, and similar numbers in March.

December 2008: A water main break caused 37th St. just north of Glenmore Trail to be closed to traffic. City of Calgary crews were concerned about the road collapsing. 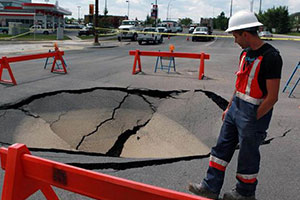 The weather isn’t the only factor in water main breaks. The pipe’s material and age, along with changes in water pressure, the installation process and unforeseen issues, and vibrations from heavy traffic or construction can be factors.

Soil acidity can also contribute to breaks. In the 1990s, more than 100,000 soil readings were collected. The hotter the soil, the faster a pipe would corrode, "which would probably elevate that pipe in the priority order of our replacement program," Hughes said.

A sophisticated Geographical Information System or GIS risk model that pulls all the data about the pipes in the city helps crews determine which pipes need to be protected and replaced and when.

July 2009: City of Calgary employee Mohammed Kaddoura examines a sink hole that occurred in the middle of the intersection of Sun Valley Boulevard and Sunpark Drive. The hole appeared following a water main break in the intersection.

The move to PVC in 1976 from a largely metallic network has helped drive down the break rate. The network is currently about 50 per cent plastic pipe and 50 per cent is a mixture of metallic and concrete.

"Like cars, for example, you have pipe technology that moves on," Hughes said.

More information about the water main system and water main breaks, including current breaks the city is dealing with at any given time, can be found on the city’s website.