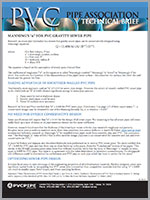 The equation is based on the assumption of steady open-channel flow.

The coefficient of roughness ("n") in the equation is called "Manning's number", "Manning's "n" factor:" or "Manning's n" for short. The coefficient is a function of the characteristics of the pipes inner surface - the smoother the surface, the lower the coef­ficient and the greater the flow.

Traditionally, most engineers used an "n" of 0.013 for sewer-pipe design. However, the advent of smooth-walled PVC sewer pipe in the 1960s with an "n" of 0.009 allowed significant savings in sewer pipe systems:

No Need For Overly Conservative Design

Some specifications still require that "n" = 0.013 for the design of all sewer pipes. The reasoning is that all sewer pipes will even­tually build up a layer of slime, so all pipe materials should use the same coefficient.

However, research has shown that the thickness of the slime layer varies with the pipe material's roughness and porosity. Rougher, more porous surfaces maintain more slime than smoother, less porous surfaces. A report by Fisher summarized hydraulic research on Manning's "n" for installed sewer pipes made from concrete, clay, and PVC. The conclusion was: "The Manning's "n" value of 0.013 that is often used for design purposes is un-conservative for concrete and clay and over­-conservative for PVC."

A paper by Bishop and Jeppson also described hydraulic tests performed on in-service PVC sewer pipes. The study verified that "n" = 0.009 for PVC pipe and that there was no slime build-up in the pipes. From the "Conclusions" section of the paper: "The results of the 25 field measurements taken from four different localities verify that the value of Manning's "n" should be taken equal to 0.009 for PVC pipe. This value is in agreement with the value determined in laboratory measurements. No distinguish­able difference could be determined by eye between new PVC pipe or such pipe which has been in service for five years."