PVC Pipe for Performance and Value to Water Utilities 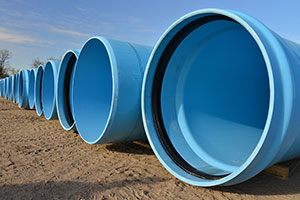 Our nation’s water infrastructure, the system that delivers drinking water, wastewater, and storm water to our communities, received a D grade from the American Society of Civil Engineers. The professional association reported that a large portion of the country’s water system is in poor to fair condition and is mostly below standard, with many of the pipes in the ground approaching the end of their service life.

"According to a report by the National Taxpayers Union [NTU], iron pipe longevity is plummeting due to significant reductions in iron pipe wall thickness, says Dick Doyle, president and chief executive officer of the Vinyl Institute. "Couple this with the fact that corrosive soils affect 75 percent of our nation’s water infrastructure, and the seriousness of selecting proper piping systems that do not corrode becomes even more apparent." Pipe networks are the largest component of a utility’s assets and significantly affect operation and maintenance costs, which are, according to a 2012 report by the Competitive Enterprise Institute, increasing annually at 6 percent above inflation because of the continued use of inferior iron pipe.

The conventional approach to water pipe replacement has been to merely replace the pipe with the same material regardless of price and performance. According to a 2013 U.S. Conference of Mayors report on municipal procurement, "The common practice of choosing metallic pipes without a full financial evaluation continues to dominate procurement decision-making."

Performance and Savings Associated With PVC

Noncorrosive PVC pipe can achieve considerable replacement cost savings. A 2012 study by Utah State University’s Buried Structures Laboratory indicates that PVC pipe has a design life of 100 years or more. Additionally, the study showed that municipalities using PVC piping have experienced life cycle costs that are 30 to 70 percent lower than those of metallic pipe. According to a 2011 study by the American Water Works Association’s Water Research Foundation, ductile iron pipes with the thinnest walls (representing the majority of metallic pipe sold) in moderately corrosive soils have a life expectancy of only11 to 14 years.

PVC’s corrosion resistance also helps reduce water main breaks. An estimated 300,000 water main breaks occur annually in the United States and Canada. Leaking pipes lose roughly 2.6 trillion gallons of drinking water each year, according to the American Society of Civil Engineers. Mr. Doyle says, "This loss is equal to 17 percent of all the water pumped in the United States and costs our economy more than $50 billion annually. Ratepayers end up footing the bill for leaked water, iron pipe maintenance, and premature pipe replacement. It’s an unsustainable proposition for communities."

PVC pipes used for water mains perform the best of any commercially available pipes on the market today, according to Mr. Doyle. The Utah State study found that PVC pipes have the lowest break rates compared to other pipe materials, including cast iron, ductile iron, steel, and concrete, potentially saving billions of dollars over the life of the nation’s water systems. The advantages of PVC may also include more efficient and lower installation costs. The European Plastic Pipes and Fitting Association found that PVC sewer pipe could be installed 30 percent faster than conventional pipes.

The City of Burton, Michigan, was recognized recently with the 2015 Innovation in Infrastructure and Technology award from the Genesee County Metropolitan Planning Commission for its five year project to replace its corroding iron pipes with PVC. Burton Mayor Paula Zelenko stated recently in The Burton Review, "The City is looking to the future using PVC water main pipe, which is manufactured as a green product, requires less energy and fewer resources and has a conservative life expectancy of at least 100 years.

Most importantly, because PVC pipe is non-corrosive, the quality of the water delivered to the residents is healthier than water carried by ductile iron. . . . Providing safe drinking water is a top priority for my administration. . . . The use of PVC will also allow the City to increase water pressure to the residents by an average of 25 pounds, further improving quality of life and increasing fire-fighting safety. The quality of the pipe and the expected longevity will also result in fewer interruptions in service. The use of PVC is saving the taxpayers of Burton $651,000."

The City of Indianapolis, Indiana, found that PVC water pipe had a failure rate 2.5 times lower than traditional pipe materials, which resulted in significant cost savings for ratepayers. As a solution to corrosion and to reduce costs, Pleasanton, California, began using corrosion-proof PVC pipe in the mid-1980s because PVC does not need coatings, liners, or other materials to ensure strength or sustainability. Pleasanton found PVC pipe to be about 70 percent cheaper than ductile iron pipe. Schenectady, New York, Mayor Brian Stratton, a former co-chair of the U.S. Conference of Mayors Water Council, stated in the May 2010 issue of U.S. Mayor, "The traditional habit of using one or two pipe materials exclusively is no longer satisfactory. Local officials need to compare all proven pipe materials on a life-cycle basis before choosing the best pipe for the city."

NTU also reported savings. Mr. Doyle explains, "NTU estimates that replacing old-fashioned cast iron pipe with PVC would save an estimated $245 billion, or 11.5 percent of the total replacement value of all pipe. By replacing ductile iron pipe with PVC, the average cost savings is estimated at $126 billion, making up 5.9 percent of the total. A shift in pipe selection from old iron and ductile iron pipe materials to PVC pipe could reduce the current estimated total replacement value of iron metallic pipes from $1.36 trillion to $991 billion."

Despite meeting or exceeding industry standards, some pipe materials are excluded from consideration during the procurement process. Considering all materials introduces competition and enables procurement decisions that provide the best water infrastructure for taxpayer dollars. The U.S. Department of Agriculture (USDA) has had success with this approach, achieving value for taxpayers in programs for rural water and sewer systems since the 1970s. Mr. Doyle said, "The Vinyl Institute and our colleagues at the PVC Pipe Association are asking that Congress replicate the USDA’s competitive procurement policies for funding of state and municipal water and sewer infrastructure projects."

He also stated, "As well, we are very excited that the PVC pipe industry has completed the first International Organization for Standardization-compliant, peer reviewed, industry-wide Environmental Product Declaration (EPD) for water and sewer pipes in North America, which benchmarks the impacts of PVC pipe products across their life cycles. It is fully transparent and verified by NSF International as an industry best practice. (NSF International led the development of the American National Standards for all materials and products that treat or come in contact with drinking water. In 1990, the U.S. Environmental Protection Agency replaced its own drinking water product advisory program with the NSF International standards.) PVC’s smooth interior surface minimizes energy consumption for pumping due to reduced friction forces, and its 100-year-plus life means that it has to be replaced less often, resulting in additional environmental impact reductions. Finally, the EPD unequivocally demonstrates that PVC pipe is the safest and most durable material over its lifetime for the distribution of clean water for public consumption."